Borrelia biofilms are now proven to constitute expressions of Human disease in multiple sites:
Skin: Borrelia lymphocytoma, Heart Valve: borrelia Endocarditis, Bone: borrelia Osteomyelitis
In the Ixodid tick gut: biofilms of Borrelia are established and provide a survival mechanism for the
infectomes of Borrelia between the Blood meals which provide the Only nutrition to the Borrelia.
Blood meals taken by a tick may be spaced at one year intervals.
Biofilms of borrelia are Communities. Within each biofilm Community there is microbe Specialization.
Shape shifting of borrelia between spiral, to cystic, to granualr borrelia is confirmed my microscopic
inspection of Living borrelia biofilm communities and corroborates the Specialization of individual
borrelia because of obvious differences in Shape. Biochemical specialization, quorum sensing, quorum Quenching, lateral DNA transfers between members of the biofilm community [horizontal DNA Transfer]
production of self-generated extrcellular matrix materials [ Outer surface sloughed proteins,
and extrusion of DNA into the Matrix ( extracellualr DNA [eDNA]) :: These are all in play in Borrelia biofilms.
Biofilm infections are ALWAYS CHRONIC INFECTIONS.
Biofilm infections are Never Cured by simple short course Antibiotic Therapies.
Please follow the link ( You Tube above) to view the Borrelia biofilms from the Laboratory of Dr Eva Sapi, University of New Haven,
West Haven , Connecdticut. The video is in High Definition , with a resolution of 1080dpi, so the images on
your computer screen are fully equal to the images as seen through the microscope. The "green glow" in the images is due to the insertion of Green fluorescent Protein (GFP) into borrelia burgdorferi to enable sharp contrast between
individual biofilm community members and the intervening extracellular matrix investment material

Published on Oct 2, 2013
Eva Sapi, Ph.D., Associate Professor of Biology and Environmental Science at the University of New Haven, hosted my visit 2008. She collaborated with Dr. Alan MacDonald, retired pathologist and Borrelia career researcher, to discover and prove that Borrelia creates biofilms, as microbes have been doing for three billion years.

Using video microscopy, Dr. Sapi's grad student David Luecke explains in this video how DNA from the Borrelia burgdorferi strain B31 "fluoresces" or glows an eerie green. Any green life forms you see in their various states originate from the B31 strain of Borrelia -- one of 100+ strains known.

REMINDER: Most Lyme disease tests only test for ONE strain of Borrelia! Igenex, Advanced Labs and Spirostats will test for more than one strain, however.

Prior to Dr. Sapi's pioneering efforts researchers dismissed Borrelia biofilms. As well, Borrelia biofilm would ruffle the feathers of the IDSA, NIH, CDC and (most) insurance companies, as it would spell out an obvious scientific syllogism for neuroborreliosis -- known previously as chronic Lyme Disease.

Later, they learned that Sapi et al were correct -- that the standard BSK media could be enriched with collagenase (which humans have abundantly) and this media proved to be ideal for growing spirochetal, slimy communities!

This video shows four different life forms alive in the community: spirochetes, cysts, granular and of course the biofilm community itself. Biofilms protect the microbial community from the immune system and antibiotics, which enable infections to live indefinitely inside us.

Note: you may have seen this before in low resolution. I offered it to the producers of Under Our Skin years ago (free of charge). In this HD version, I included some amazing new high res AFM photos and additional explanations. Special thanks to David Luecke, who provided these slides, and of course to the Sapi-MacDonald team!

This video was produced by The Arthroplasty Patient Foundation. Please offer an any-sized, tax deductible donation at this link:

Our specific library of current intelligence on biofilms:

Our documentary on biofilms, Why Am I Still Sick, now available in French, Spanish, Simplified and Traditional Chinese: 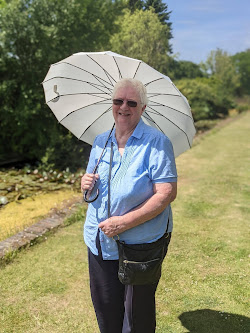 Would you see these tiny ticks as you brush by?
Joanne Drayson | Create your badge